Aimee McLeod: Visit to a Pottery Fair in France 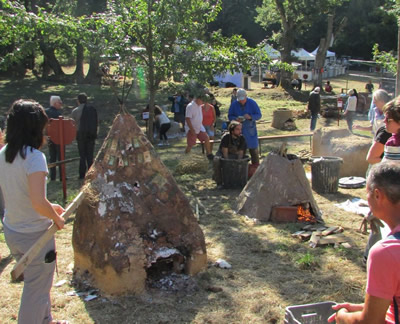 On holiday recently, we searched out some interesting potty places to visit.

The village of St Jean-la Poterie, in Brittany, has a 1500-year tradition of pottery and clay work. Their two-day “Fête des Lises” was held in a large park and was a festival more like a mini convention than a market.

At the entrance, a stall displayed photos of local potters and traditional methods. I was intrigued by the way the potters sat with their legs splayed at hip height while throwing on their stick propelled wheels. It looked most uncomfortable!

A Romanian potter had a display and was throwing on a standing kick wheel with a large fly-wheel, another was working on a slightly less uncomfortable stick-propelled wheel, legs not at right angles. Further along, a rope coiled around a wooden frame had slabs of clay pressed against it to build a large pot. To finish, the wooden pieces were removed, and the rope pulled out, leaving a pot with a nice inner texture.

Paper kilns were in the process of being built and fired, and the contents revealed. The previous day, there had been raku firings, and at night they had loaded and fired the wood kiln and had a feast with dancing.

About 40 potters had stalls to sell their wares, beautiful wheel thrown work, a lot of raku, but also quirky items. Of course, there was a pottery supplier as well. I was disappointed I did not find some wonderful tool unavailable in NZ!

The whole park was dotted with “sculptures” made by local school children, and invited exhibitors. There were wheels and clay for the public to “have a go”. We were amused by the bicycle powered wheel – one dad and his kids were having a ball!

Similar to our NZ conventions, there were demonstrations, activities, firings, and displays. The biggest difference was that it was a free public outdoors event. Obviously there was support from the local community in a place where many earn their living from clay. Although I did not go into details about cost to participants, or pay for demonstrators, it seems to me that something along those lines could well be organised in New Zealand with much less work than our conventions. Getting the local council on board and making it a free-to-the public event in a public space might work – although in Wellington we could never rely on two fine days in a row!

Here are some images of my visit.