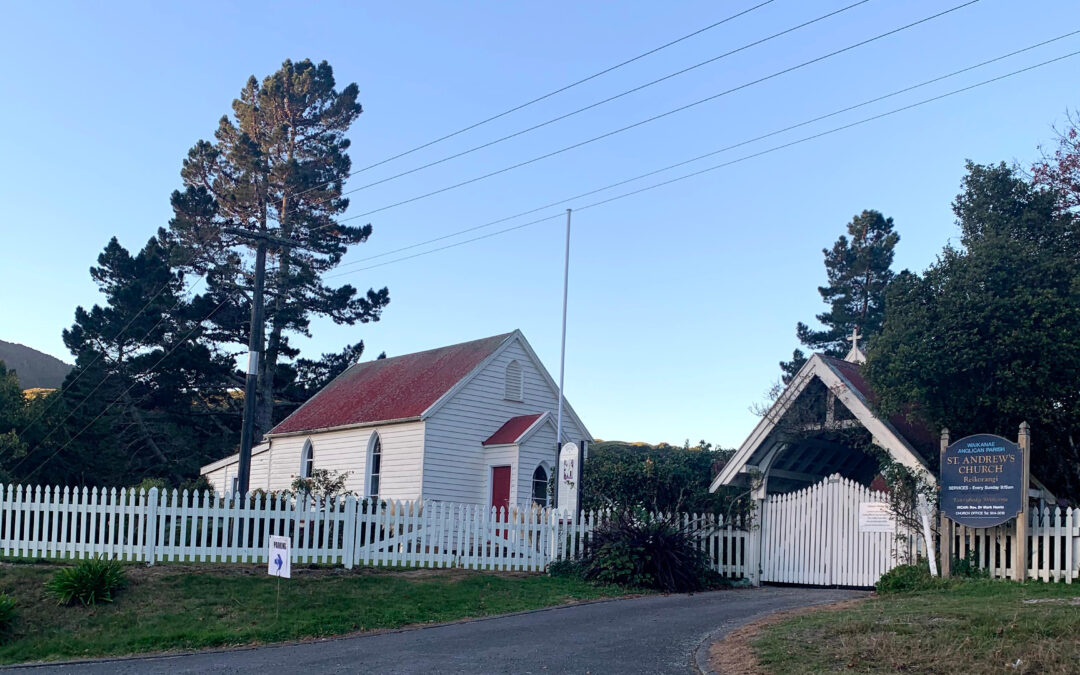 On a bright, sunny Monday afternoon in May 2021, around 150 people gathered to celebrate the life of Wilf Wright. Among them were potters, artists, musicians, family, caregivers and helpers. Those in attendance listened to family eulogies and the prayers of Rev Tim Mapplebeck and Bishop Justin Duckworth. Wilf and Janet, from their time of marriage in 1963, were bound in love and by Christian beliefs. The large crowd was the reflection of Wilf’s high regard in his community.

Wilf lay at the Whakarongotai Marae in Waikanae for two days prior to the service in the garden of St. Andrew’s Church, 5 Akatarawa Road, Reikorangi. His coffin was draped with the two traditional kahu (cloak) locally woven with Ruru, Kererū (NZ wood pigeon) and Albatross feathers. During the service at the church, a single kererū soared above and the cockerel in the valley resounded as if joining the celebration. Wilf and Janet, as a team, were among the founders of the New Zealand studio pottery movement and that legacy is still alive today. To borrow words from Wilf’s brother-in-law (Ed Saul), “Wilf was heading to his final firing.”

Wilf was born in Christchurch in 1931 and his family relocated to Wellington in 1946. Hans Coper’s pots at the Stockton’s gallery in Wellington piqued Wilf’s curiosity and creativity. When the gallery went up for sale, his parents purchased it and specialised in international pottery including that of Lucie Rie, Hans Coper and later Bernard Leach’s St Ives through Ray Chapman-Taylor who was the agent of Leach pottery at the time. Later, Wilf was fascinated by Kawai Kanjirō’s originality and promoted pots from Japan through Terry Barrow’s introduction to Yanagi Sōetsu, the founder of the Mingei (folk craft) movement. The influence of Japanese Mingei movement, interpreted in Bernard Leach’s A Potter’s Book (1940), became strong in NZ with Leach’s milestone visit in January 1962. In the same year, the Stockton’s held the exhibitions of Mingei Pottery from Japan and later Wilf organized several exhibitions for emerging studio potters in New Zealand.

In 1956, Wilf’s family found paradise at Ngatiawa Rd, Reikorangi, around 65 km north of Wellington. When Wilf and Janet married in 1963 and they settled in Reikorangi. He decided to become a potter himself, learning pottery in an adult courses from Dame Doreen Blumhardt and was encouraged by pioneer potters, Helen Mason, Barry Brickell, Terry Barrow, Roy and Juliet Cowan, Mirek Smíšek, Len Castle. With Barry Brickell he built the first oil fire kiln at Reikorangi in 1957 and another one in 1965 designed by Roy Cowan. They later added electric and gas kilns that gave them easier control. Their pots were fired with a variety of copper, shino, dolomite, limestone and chun glazes which became their signature pots.

Wilf and Janet welcomed significant visitors with their renowned hospitality including John Chappell (1931-1964), an English potter, who had worked in Japan since 1959, and was a great influence on Wilf’s pottery career. While awaiting a visa renewal to return to Japan, John stayed at Reikorangi for three months. Wilf said that this was a valuable time of learning. Other visitors included Bernard Leach in 1962, Kawai Takeichi in 1964 and Hamada Shōji with his son Atsuya in 1965.

Together with their children, Samatha and Adrian, Wilf and Janet with their love of trees and nature developed an animal park to complement the pottery. Following the Stock Market crash of 1987, they opened a café that became a pilgrimage for pottery-loving tourists which sustained them through the changing pottery scene. The exhibition of the Work of Janet and Wilf Wright at Mahara Gallery in 2013 highlighted their lifetime achievements at Reikorangi Potteries over 50 years.

Fire in hand, A cold ball of fire, Fire which has changed its shape Hidden in the clay…pottery

The beautiful celebration of Wilf’s life concluded at the old local school where many memories were shared. The Reikorangi community showed strength and solidarity, with some families of attendees including four generations. The legends of Reikorangi Potteries were retold as the copper flame of sunset burned behind the valley hills.

Kumiko Jacolin is a ceramic artist and researcher based in Wellington.  She is currently studying towards a PhD at Victoria University of Wellington where she is exploring the artistic connections between Japan and Aotearoa through the work of potter James Greig.