Quartz – the Museum of Studio Ceramics 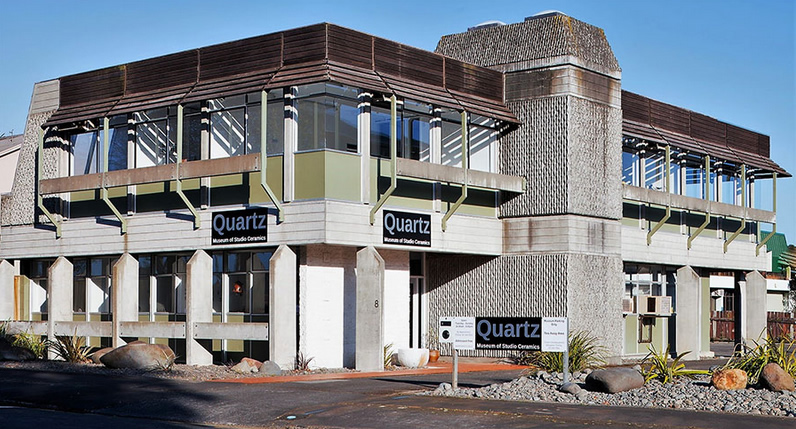 The name Quartz may seem odd for a museum devoted to ceramics but for its owner Rick Rudd, it’s perfect.

He quotes A Potter’s Book, by Bernard Leach: “Quartz, raised to a red heat, quenched in water and ground to a powder is a most valuable material to potters both in clays and glazes.” Quartz: The Museum Of Studio Ceramics opened at 8 Bates St, opposite the Whanganui courthouse, and its establishment has been keenly anticipated by Wanganui’s arts community for a least a year.

Ceramics fill every room on both floors of the former Payne Sewell building – much of it Rick’s own work but with collections and pieces by other ceramicists as well.

The museum is a true labour of love. Rick sold his house in Castlecliff to be able to buy the building, and he admits he will make no money at all from the project.

Entry to the museum is free [donations are welcome], and none of the ceramics are for sale except those in a small shop next to the reception area However, the Wanganui District Council and several local businesses have given Rick generous assistance in getting the museum off the ground.

The idea for Quartz came from seeing the works of other well-known ceramicists being sold off, piece by piece, after the artist died. “It all seemed a bit sad – these fabulous collections being carefully built up and then suddenly dispersed,” Rick said. “And I thought about my own work. It’s my history; almost like my children. I didn’t want that to happen to my work.”

So Rick set up the Rick Rudd Foundation, a charitable trust which owns the museum building and Rick’s entire ceramics collection. “I gave the building and the collection to the foundation – I don’t actually own anything now – and my hope is that after I pop my clogs this can continue. I don’t know how, because I can’t leave an endowment that can pay for it. “But hopefully, if I can keep this going for a decade, it will become so entrenched in Wanganui that somehow it will continue.”

Rick was born in Britain and studied art and design at Wolverhampton College of Art. He emigrated to New Zealand in 1973 and settled in Wanganui. He began art school with the intention of studying textile design but in his first year fell in love with pottery after taking a three-month introductory course. He is most well-known for his vessels, such as teapots, which often take on abstract and convoluted forms. Black, white and grey are common colours in Rick’s work, although his more recent works have included colour. Craft historian Helen Schamroth described Rick’s works in colour as “brief flirtations”. Rick has won numerous awards for his work, including the Fletcher Brownbuilt Pottery Award and the people’s choice award at the Portage Ceramic Awards, and his work is held in art galleries and museums throughout New Zealand.

QUARTZ IS A MUSEUM, not a gallery, he says, because most of the items in it are on permanent display.

“There are three rooms which are exhibitions that will change every six months or so, from different collections or that I’ve curated from a group of collections.” The three exhibitions currently on display include works by Ross Mitchell-Anyon, John Parker, and items from the Simon Manchester collection. There is also a room dedicated to a ceramics installation which Rick will commission once a year. “I give the artist some money to make the work and to transport it to Wanganui, but it still belongs to the artist,” Rick said.

This year’s installation is by Dunedin-based artist Blue Black. Called Where The Wild Things Live, the installation is a collection of found objects such as flowers, egg cartons, bed springs, and plant roots, which have been dipped in layers of clay. Rick has bought two items from the installation for his collection, although that won’t necessarily happen every year. Much of the ground floor is taken up with the New Zealand History Collection from Rick’s personal – and ever-growing – collection of ceramics.

The collection is divided into four chronological eras. “These are the people that I consider to be the movers and shakers of their time,” Rick said. “The collection isn’t complete; there are still works by some ceramicists that I would like to add to the collection.” There’s also a small library and an international collection of works that Rick has picked up from around the world, from Russia to Australia.

The majority of the top floor is devoted to a retrospective of Rick’s work. Throughout the years he has kept pieces of his own making, and they are now on display. “They include the very first piece I made in 1968 through to my most recent works.” One section of the Rick Rudd collection is made of very large garden ceramics that he worked on in the 1990s. There’s an entire room devoted to teapots, which fascinate with their intricate and humorous designs.

Rick admits working on getting the museum up and running has kept him away from his clay for a year. “It’s the longest I’ve been without clay since I began. I’ve had a month off here and there when I’ve been overseas, but that’s all.” Rick said he immediately fell in love with the Payne Sewell building, which was designed in the 1970s by Wanganui architect Bruce Dickson. “It’s very much from my era.” The building had been empty for a while and a fair amount of internal work had to be done to bring it up to scratch, but Rick could see its potential. “The spaces, the light, were perfect – it actually looks like a museum. And it’s in a great location.”

In its first week Quartz attracted around 100 people, a mixture of local, national and international visitors. Rick said he has noticed people tend to stay for an hour or even more. “There’s just so much to see here.”