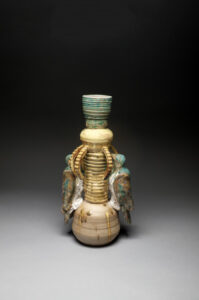 The Hon Carmel Sepuloni, Minister for Arts, Culture and Heritage has announced the winner of the 2021 Emerging Practitioner in Clay Award via video message.

The $12,000 triennial Award, which was first presented by the Rick Rudd Foundation in 2018, has been established to encourage, foster and promote emerging practitioners of studio ceramics. The Minister’s message announced that the second winner of the award is Tāmaki Makaurau artist HineWaiKerekere, with her work ‘Kererū i roto i te nikau (Kereru in a nikau)’.

The Award was judged by Andrea du Chatenier, John Parker and Rick Rudd. Judges commented “The winning piece could only have been made in Aotearoa New Zealand. Imaged in clay, one of our iconic birds, the Kererū (native pigeon) and one of our iconic trees, the nikau palm, form a trophy-like vessel.”

“This chosen work is made using recycled and local clays and reclaimed glaze remnants with added oxides. It references environmental and sustainability issues and celebrates our native flora and fauna. The making is well considered and the confident use of clay and glaze impressed us. The work is loosely formed and textured without being slavishly literal in its execution.”

“We hope that by winning the Award HineWaiKerekere is able to progress her work with clay and look forward to seeing the potential we view in her work realised in the future.”

In particular, the Award focusses on early career artists, and highlights the value of ceramic practice to the local, national and international community. The Award received 67 entries from as far afield as Auckland and Invercargill, and 29 of them were selected for an exhibition at Quartz, Museum of Studio Ceramics, in Whanganui. Entries received ranged in styles, aesthetics and other aspects of working with clay from the humble to the extroverted.

Judges commented that the aim of this award is to present talent which has not been identified previously and to give the recipient of the Award a financial boost, enabling them to progress their career in ceramics.

The exhibition will be on show at Quartz, Museum of Studio Ceramics, Whanganui, for 6 months from 21 September, 2021.

The video announcement by Minister Sepuloni can be viewed here.

The Rick Rudd Foundation was established in 2013 as a charitable trust.  In 2014 Rick Rudd purchased the building at 8 Bates Street and gifted this and his collection of studio ceramics to the Foundation.

The aim of the Foundation is to provide a public amenity by the ownership, development, curation and public exhibition of the Rick Rudd Collection.  With access to the Rick Rudd Library and Archive it allows for education of potters and the public.

Rick Rudd began his life-long passion for clay in September 1968 at Great Yarmouth College of Art, U.K. To celebrate this obsession of more than 50 years of working with clay, the Emerging Practitioner in Clay Award is offered through the Foundation to foster and encourage new talent.  The first Award and exhibition was staged in 2018 and this is the second presentation of what is planned to be a triennial event.

The Museum was opened in November 2015 to house the Rick Rudd Collection of studio ceramics.

In 2019 well-known Wellington collector, Simon Manchester, died and bequeathed his extensive ceramic collection to the Rick Rudd Foundation. Over 500 works from this collection are permanently displayed.

Major displays of works by Anneke Borren, Len Castle, Elizabeth Lissaman, John Parker and Rick Rudd are on show. Temporary exhibitions are held, and an annual installation is commissioned.