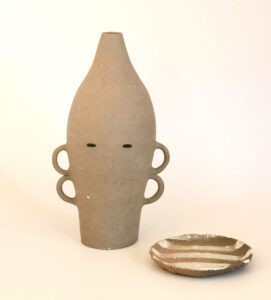 The Ceramics Association of New Zealand is pleased to announce that Kate Fitzharris is the winner of the Ceramics NZ 60th National Diamond Jubilee Exhibition Primo-Pro Premier Award for, A Small Plate made from Japanese clays.

The $3000 Premier Award and full list of prizes were presented on Friday October 22nd at the Otago Art Society in Ōtepoti Dunedin, by the exhibition judge Dr Emma Bugden.

On presenting the award Bugden said, “This is the work that stayed with me the longest. It’s deceptively simple piece, demonstrating a maker at the top of their game, who knows that sometimes the most compelling pots can be amongst the quietest. It’s a piece that pays its respects to ceramic history and demonstrates how the simplest of gestures can magically evoke life and personality”.

Teresa Peters took away the Pack and Send Merit Award for her digital archive of clay works titled Artefacts and Patrick Ferris was awarded the Nelson Pottery Supplies Emerging Artist Award for his explorations in parametric design and additive manufacture in Convergence. Special mentions were given to Gaeleen Morley for The Journey and to Karin Amdal for Vase Up Down.

The CCG People’s Choice award will be announced after the exhibition closes on November 20th.

The Diamond Jubilee is generously supported by Creative New Zealand and the NZ Lottery Grants Board. We are grateful to all our sponsors who have supported the event: